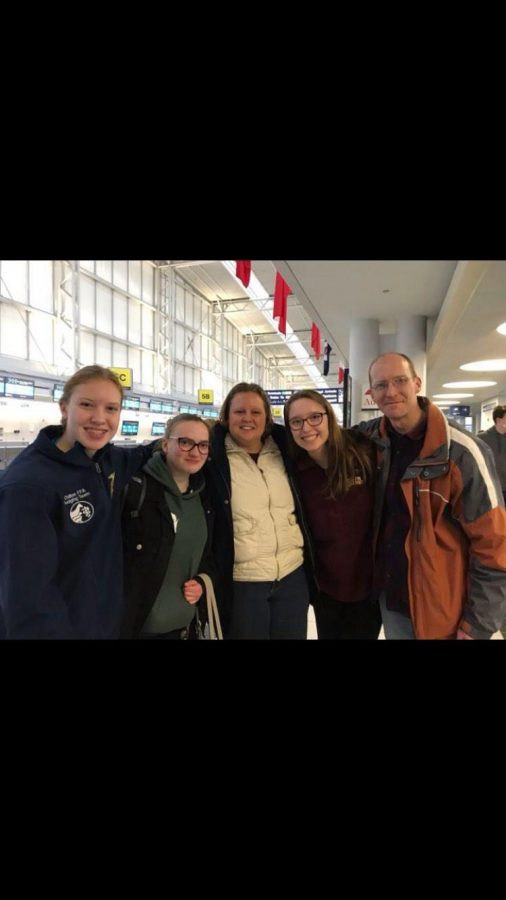 Silvia Usai (second from right) says farewell to her host family the Diedrichs, including junior Julia Diedrich (far left), at the airport in Chicago.

This year, CHS was able to host one AFS student, Silvia Usai. However, due to the COVID-19 pandemic, her time here was cut short. Last month, Silvia was able to fly back to Italy.

“My flight back to Italy was pretty bad because it was roughly organized. There were no AFS volunteers, not in Chicago or in Rome,” Silvia said.

The flight was delayed for almost two hours and was run through a “cheap Spanish company,” according to Silvia.

The flight to Rome lasted nine hours with another six hour drive back to Milan, near her hometown of Legano.

“It was awful,” Silvia said. “I can’t even remember how many times I cried.”

The situation in Italy is still bad, but it is starting to get better. The pandemic seems to have peaked there with the number of infections slowly decreasing.

“It is kind of scary. The virus could actually kill you or someone you care about, and it spreads really easily. … I actually thought I could have caught coronavirus on that plane, but, fortunately, I didn’t,” Silvia said.

Silvia has been in quarantine with her family since she returned home. “I basically spend every day with my family,” she said.

Silvia has been home for a month and has only been outside twice.

“I’m just disappointed that I didn’t get the chance to finish my experience like other students,” said Silvia.

As is the case with other seniors, Silvia has to miss out on many different experiences such as prom and graduation.

Silvia said, “I also wish I could’ve said goodbye instead of just disappearing.”

Italy is entering Phase Two. This means the quarantine will end on May 4. According to Wanted in Rome, a magazine in English for expatriates in Rome, experts are still discussing with the government how to safely start to open up businesses until a vaccine or effective treatment can be established.

Phase Two could be in place as long as six to eight months before the country could move into Phase Three, which will work to bring the country back to normalcy.