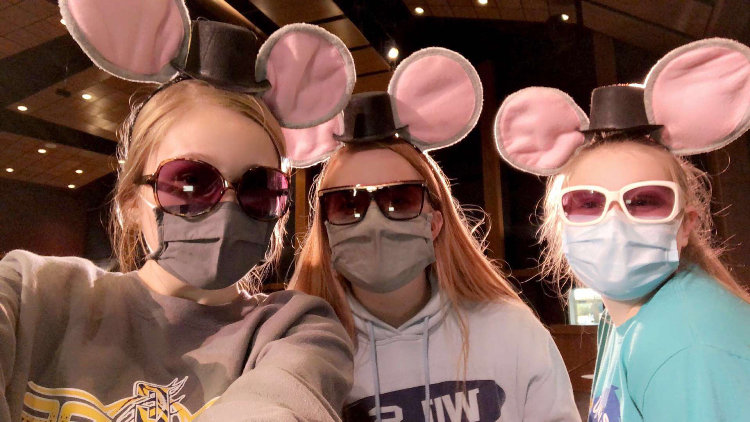 Photo submitted by Ellie Fuerbringer, Seniors Cortney Piepenburg, Ellie Fuerbringer, and Sara Ray are dressed in Mice costumes for one of the comedy skits in CHS's virtual talent show 'Chilton's got talent 2020- A Virtual Variety Show for All!'

Over the course of four days, between three showtimes, CHS hosted their first–ever virtual talent show, “Chilton’s Got Talent 2020 — A Virtual Variety Show for All!” The show was put on by the Engler Center Performing Arts (ECPA) student leadership group, a new student organization dedicated to organizing events involving the theater as well as constructing various props and sets for different shows.

“The ECPA wanted to put on a show for the students who are part of the theater because they have lost so many opportunities, including the fall play,” said junior Haylee Mueller, a junior who is involved in the ECPA. “This gives them some opportunity to do something related to that.”

With COVID-19 there could not be a fall play. Many students were sad to not have this experience. This made the ECPA leadership group want to do something in place of that.

Many students who normally participate in the play did the variety show. The variety show was also open to all students in the high school who wanted to take part in the show.

The show included a wide variety of acts including singing, comedy, instrumental music and dancing. Even some of the Chilton teachers from the high school and middle school participated in this event.

There were many good things that came out of putting on a virtual show, but also a few downsides. “Anyone who wants to watch the show can, no matter how far away they are,” said Mrs. Jenie Farrell, the Engler Center for the Performing Arts executive director and ECPA adviser. “However, it can be challenging because our options are limited when it comes to skits, plays or musicals due to licensing restrictions.”

Many families and students watched the performances on November 5, 7 and 8. Tickets were available for purchase online, giving the audience member a code to watch the performance stream. The show ran for about an hour and fifteen minutes, the same duration as a typical choir or band concert at the high school.

Since the end of the variety show, the ECPA student leadership group is now brainstorming new ideas to get more students involved with the theater.