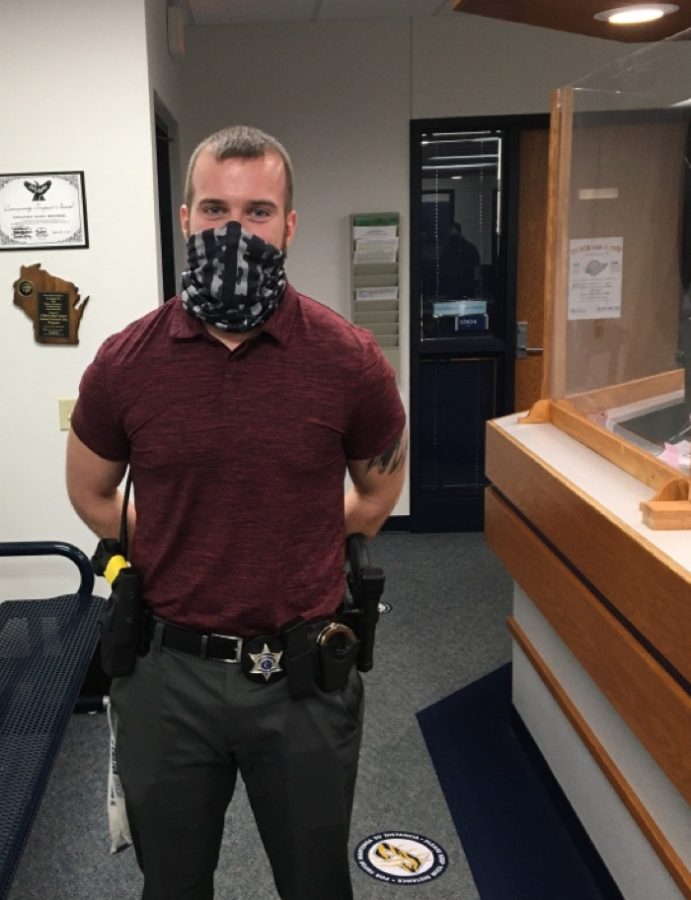 Deputy Handrich's office is in the CHS main office, but he's more often found in the hallways and classrooms talking with the students and staff. Photo by Lukas Halbach

The Prowler had the privilege of interviewing another new face in the Chilton School District, school resource officer Deputy Andrew Handrich.

In an effort to introduce our new staff members to the general public, The Prowler continues to introduce one of them in each issue this fall semester.

This is Deputy Handrich’s first school resource officer position, but he is not new to the Calumet County Sheriff’s Office. He started in the jail and worked for Calumet County Corrections for six months. Then Deputy Handrich moved out to the road in October of 2019, and worked as a patrol officer for almost a year before becoming the Chilton school resource officer.

When asked about his favorite part of working at Chilton so far, he said, “Hanging out with you guys. I mean, it’s a blast. Obviously, this year is a little different with everything going on, but just getting to know all you and being able to pop in classes and say hi. … It doesn’t get much better.”

Every day looks different for Deputy Handrich. He usually spends his time between the three schools in the district and depending on which school needs him, decides where he spends most of his day.

He said that being in law enforcement has been something that he’s always wanted to do. Deputy Handrich’s mom was a huge influence on him. She was a Winnebago County sheriff’s deputy for 29 years, and she retired right after he started. Having her law enforcement background for his entire life definitely helped his decision in becoming a deputy himself.

“I’d say don’t be afraid to take chances — kind of a ‘you only live once’ kind of thing,” Deputy Handrich said when asked what one piece of advice he would give. “If you make a mistake or mess up, it’s not the end of the world. It might seem like it right now. … You’re going to fail. You’re going to mess up. People are going to hate you if you do it and hate you if you don’t, so you have to do what’s best for you.”

Deputy Handrich’s favorite subject as a student was the tech classes, but his favorite core class was science.