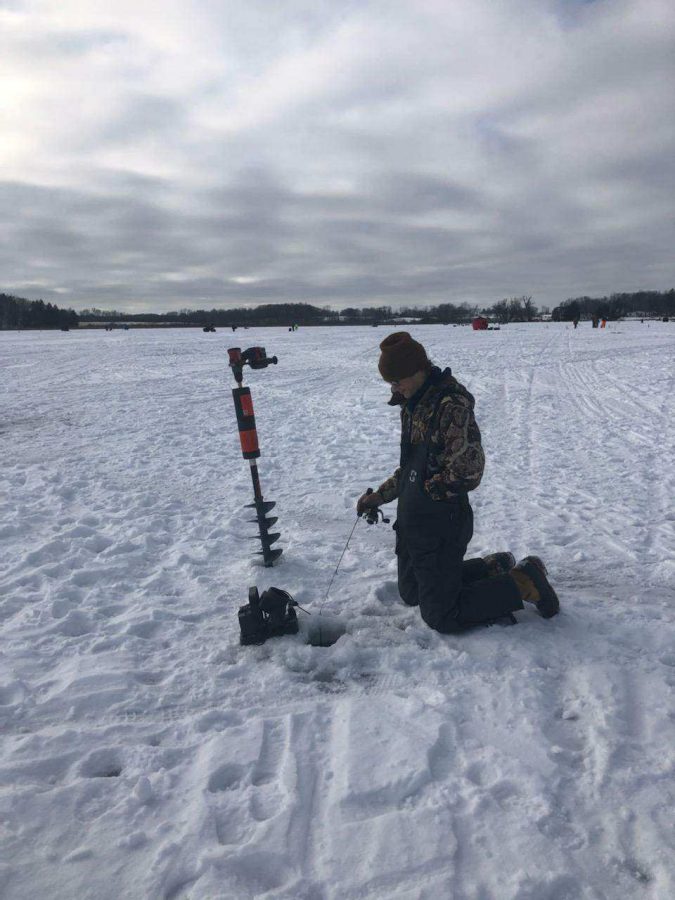 Photo submitted by Ms.Tara Porter Junior Patrick Marx participates in the Tip Up Extravaganza on Kettle Moraine Lake as a member of the CHS ice fishing team.

CHS has plenty of student-oriented activities — basketball, wrestling, volleyball and many others that are pretty well known within the school. Other activities such as Chess Club, Math Team and Menagerie don’t get the proper recognition. The specific club that will be getting some light shined on it here is the Conservation Club.

The Conservation Club’s ice fishing team recently competed in the Kettle Moraine Tip Up Extravaganza. Chilton took fifth place out of 10 teams at the tournament. The tournament took place at Kettle Moraine Lake on January 9, where they caught a total of 338.25 fish over the span of 6.5 hours.

They also competed in an earlier tournament called the Cheeseball Challenge on Long Lake near Brillion. Not only did the Chilton students finish very strong at this event, but they also qualified for the Wisconsin Interscholastic Fishing Association State Championship in the crappie category.

In the past, to qualify for the state tournament, the team had to participate in a qualifying event. This year, however, due to the pandemic teams qualify by participating in a tournament using an app called FishDonkey. They enter information, including a photo, about their catch. The state tournament will be held virtually February 19-20. Coaches will be required to enter the information in the FishDonkey app.

“Being in the club is a good experience, and it helped me get more involved in a hobby I already had,” sophomore Jakob Lemke, a member of the ice fishing team, said.

Ice fishing isn’t the only thing the Conservation Club does either. They also have trap shooting and other fun events like the Big Buck Brag Board.

Trap shooting is a sport where the athletes shoot at clay targets (or clay pigeons as they are usually referred to) that are released out of a spring trap and into the air.

“Everyone who wants to be in the league has to shoot two rounds per week, usually on a Saturday and/or Sunday, where their scores are recorded and then compared to other competitors in the conference,” CHS trap shooter Mitchell Schwobe, a junior, said.

“The season is about ten weeks long. There are five stations set up when you go to shoot, and you get five clays at each station — so 25 pigeons per round. Then your score over those 25 shots are averaged out over the course of the year and compared with other people in the EWC (Eastern Wisconsin Conference).”

Conservation Club also does a great job of encouraging deer hunting with the BBBB (Big Buck Brag Board). The BBBB is where students can bring in pictures of the deer they harvest over the course of the season to show off and have sort of a friendly competition.