‘Gentleman’s Guide to Love and Murder’ to Open April 15 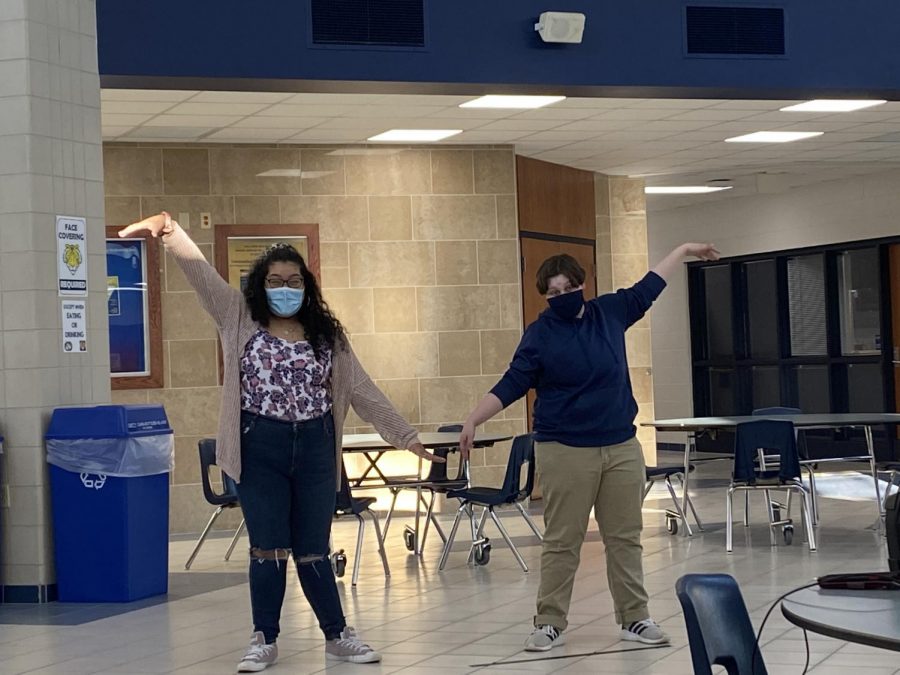 Photo by Alex Bowe Freshman Esther Garcia and sophomore Auggie Knaus choreograph the song 'Poison in My Pocket' in the commons. They are rehearsing in the commons because there is band equipment in the Engler Center; band classes are held there in order to have enough space for social distancing during the pandemic.

Why are all the D’Ysquiths dying? After many months of this ongoing pandemic, CHS is putting on a musical comedy to uplift the community’s spirits.

“A Gentleman’s Guide to Love and Murder” is a musical comedy about a poor boy named Monty Navarro and his life in early 1900s England. After his mother’s funeral, a close family friend reveals to him that he is a D’Ysquith and is eighth in the line of succession to be Earl of Heighurst. Monty Navarro D’Ysquith will do whatever it takes to rise to the occasion and gain power.

Freshman Carleigh Kohlman, who plays Ms. Barley — the girlfriend of one of the future heirs, encourages people to come see the show: “It’s different from other musicals I’ve been in, and it is funny, dark entertainment.”

“This show, quite frankly, is one of my favorites. Not only is it hilarious, but the music is entertaining, and it provides a challenge for our singers,” Ms. Annelin, who is also the show’s musical director, said. “When we were first looking for ideas, we were looking for a show that would be upbeat and funny, but musically challenging with some fun solo acting moments. ‘Gentleman’s Guide’ fits the bill.”

This musical could not happen without complying with COVID-19 guidelines. “We have several things in play to keep everyone safe,” Ms. Annelin said.

First, being masked both on and off the stage is mandatory, so the directors have found a mask that allows for the actors to be able to sing comfortably with a microphone.

Second, rehearsals have been arranged to have larger choreography numbers rehearsed in a larger space where all actors and directors can socially distance.

Finally, the show is arranged to ensure that with blocking (telling actors where to go onstage and when), the actors work with props and the space around them to create the story, but still be safe in terms of social distancing and touching minimally.

This year, the show is double casted, meaning there are two sets of leads performing on alternating nights. This was decided in the event that one of the actors is quarantined, there will be someone else to fill in for them.

There will be a total of six performances this year, so the actors will have an equal number of performances. On an actor’s off-nights, they will be performing in the chorus.

Eighty tickets will be available to attend in-person while following social distancing guidelines, but most tickets will be virtual. In-person tickets are first being offered to family members of the cast.

All tickets can be bought at www.EnglerCenter.com.