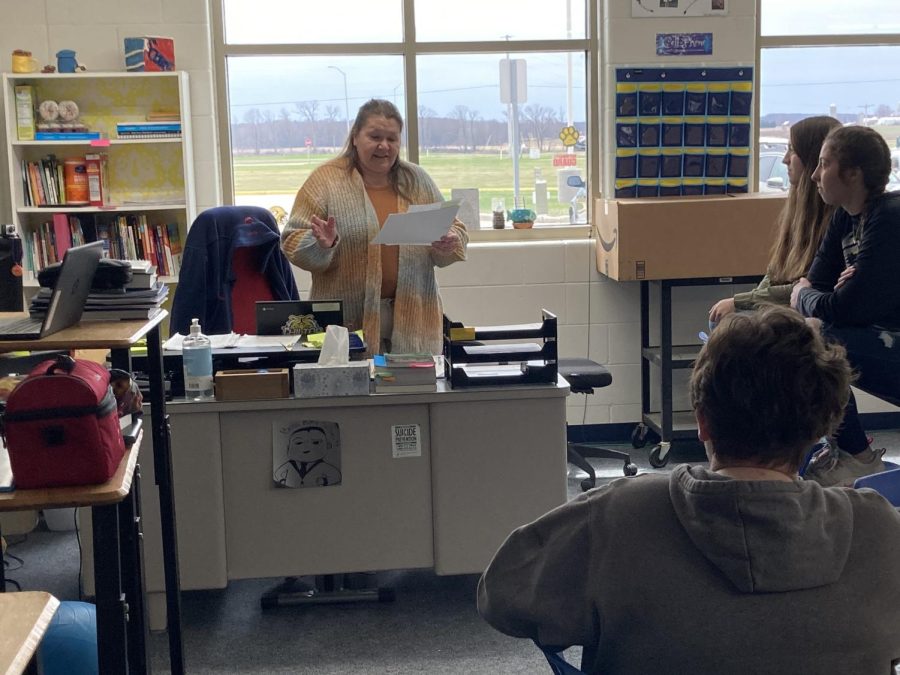 Substitute teachers are an important part of a school district, filling in for teachers who are sick or take the day off. However, in the past several years, Chilton School District — as well as many other school districts — have struggled to find enough substitutes to cover all their classes.

This has led to the hiring of full-time substitute teachers. One full-time sub the district has hired is Mrs. Kim Holze, who has worked as a teacher at various schools since 1991, and has been subbing at Chilton since 2011.

“Being a substitute teacher was a great job while raising a family because the schedule was flexible, and I didn’t have work to take home at night, which is not the case when you have your own classroom,” Mrs. Holze said.

On a normal day, if a substitute teacher doesn’t already have a job lined up, there’s an app that will say if a job is available by 6:00 a.m. A sub will then go to the office for a key to get into the classroom.

After that, sometimes, it’s just a matter of reading directions and watching the students work, and, other times, it means teaching material or leading discussions.

Mrs. Holze says the best part about being a sub is working with all of the teachers and students. “With subbing in Chilton for so many years, especially at the middle and high school level, I know all the students’ names,” she said. “I’ve been teaching them in some capacity since they’ve been in middle school, so I’ve formed a relationship with them.”

However, there is a downside to being a substitute teacher. Some students think they can get away with bad behavior, especially in a class where the sub does not know the kids’ names.

“Also, the pay isn’t the best,” Mrs. Holze said. “In no way should I be paid what a regular teacher makes in a day, but I can make more at some retail jobs with higher starting hourly wages.”

The substitute teacher shortage has been going on for a variety of reasons. According to CHS Principal Mr. Shawn Rude, within the last ten years, there have been fewer college students going into teaching, opting for other career fields instead. This lack of new teachers has meant fewer substitutes.

“Most of our subs are unemployed teachers or retired teachers,” Mr. Rude said.

Also, while in the past many retired teachers worked as substitutes, far fewer are subbing now. One possible reason for this could be the COVID-19 pandemic, as being around so many different kids each day was a cause of concern for some substitute teachers.

The lack of substitutes at Chilton has led to teachers frequently having to give up their prep time to watch students in other classrooms.

“We have an awesome group of teachers here that are very willing to help out,” said social studies teacher Mr. Scott Sabel. “However, we do have prep time for a reason, and (subbing) takes away from the ability to get things done.”

For a principal, making sure each classroom is covered can start as early as 5:15 in the morning.

“We call it scheduling gymnastics,” said Mr. Rude. “It is a lot of work, but we have a lot of great teachers working to fill in for each other among themselves.”